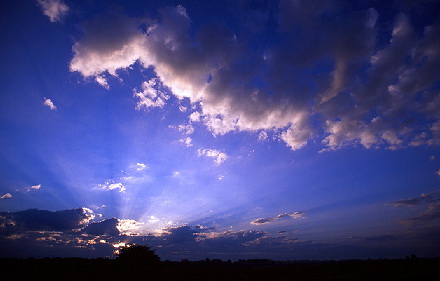 Contents
Introduction
1. Text and structure of Jn 1:1-13
2. The Word was the life and the light of men
3. The Word is the true light, coming to the world
4. Receiving or not receiving the Word (Logos)
Conclusion

The Greek term “logos” meaning “word”, “speech”... The Greek philosophy uses the term “logos” to talk about the principle of order and knowledge or the divine animating the principle pervading the Universe. The Prologue of John’s Gospel uses the word “Logos” (Word) to describe a person, because the Word is identified with Jesus in the story of the Gospel. Jesus is the incarnation of Logos (1:14). Through the Prologue, the narrator introduces the contents of the Gospel, presents the origin and mission of Logos-Jesus in the world and professes the faith of Johannine community in Jesus-Logos. The Logos (Word) in the Prologue (1:1-18) is the center of Johannine theology: Jesus is the Word (Logos), He was with God and was God (1:1); Jesus is the Word who became flesh and dwelt among mankind (1:14). Jesus is the Word of God and he says God’s word; he reveals God’s will that is the salvation of humanity (1:18; 3:16). In this article, we will explore the first part of the Prologue (1:1-13) through two characteristics of the Word: The Word is life, the Word is light, and the attitude of human beings: refusing or receiving the Word.

A’:
6 There was a man sent from God, whose name was John. 7 He came for testimony, to bear witness to the light, that all might believe through him. 8 He was not the light, but came to bear witness to the light.
B’:
9 The true light that enlightens every man was coming into the world.
C’:
10 He was in the world, and the world was made through him, yet the world knew him not. 11 He came to his own home, and his own people received him not. 12 But to all who received him, who believed in his name, he gave power to become children of God; 13 who were born, not of blood nor of the will of the flesh nor of the will of man, but of God.

The section 1:1-13 is structured in six units: A, B, C, A’, B’, C’. The two parallel units: A // A’ describe the identity of the Word (Logos). The unit A (1:1-2) is the profession of faith of the narrator and John’s community as well. The unit A’ (1:6-8) is the testimony of John the Baptist that the Word is the light. The purpose of this testimony is that all might believe in the Light-Logos. The two parallel units: B // B’ present the ministry of the Word. Through the Word, all things were made (B: 1:3-4) and the Word who was the true light has come into the world (B’: 1:9). The two parallel units C and C’ talk about the correlation between “the light” and “the darkness” (C: 1:5); between “not receiving” and “receiving” the Word (C’: 1:10-13). All these parallels in Jn 1:1-13 are presented in detail in the contents of John’s Gospel. The following analysis about the interrelation between “the Word in the Prologue” and “Jesus in the Gospel” will help to understand “who the Word (Logos) is” and “who Jesus is” according to the theology of John’s Gospel. Read more about the structure of Jn 1:1-18 in Francis J. Moloney, The Gospel of John, (Sacra Pagina Series 4), Collegeville (MN), The Liturgical Press, 1998, p. 34-35.

2. The Word was the life and the light of men

Jn 1:4 describes the relationship between the Word and mankind: “In him [Logos] was life, and the life was the light of men” (1:4). The Logos (Word) is assimilated to life, and then the life is identified with the light of men. This identification is found in the narrative of the Gospel because Jesus is assimilated to life (zoe) and the light (phos). First, Jesus “has life (zoe).” He says to the Jews in 5:26: “As the Father has life (zoen) in himself, so he has granted the Son also to have life (zoen) in himself.” Then Jesus gives to those who believe in him “to have eternal life.” At the beginning of his mission, Jesus reveals: “God so loved the world that he gave his only Son, that whoever believes in him should not perish but have eternal life” (3:16). Finally, at the end of his mission, Jesus makes known to Martha that he is life. Jesus tells her in 11:25-26: “25 I am the resurrection and the life; he who believes in me, though he die, yet shall he live, 26 and whoever lives and believes in me shall never die.” Therefore the topic of “life” is very important in Johannine theology, the goal of Jesus’ ministry is to bring life to the world (cf. 6.51). At the same time, life is assimilated to Jesus and identified with the light as well.

At the end of his public ministry (ch. 12), Jesus invites the crowd: “35 The light is with you for a little longer. Walk while you have the light, lest the darkness overtake you; he who walks in the darkness does not know where he goes. 36 While you have the light, believe in the light, that you may become sons of light” (12:35-36). This passage contains many expressions connected to the light. According to Johannine theology, “the light” in 12:25-26a refers to Jesus himself. So “the light is with you” (12:35a) means “Jesus is with you”; “to have the light” (12:35b.36a) signifies “to have Jesus”; “to believe in the light” stands for “to believe in Jesus”. The expression “to become sons of light” reminds of the Prologue saying: “to become children of God” (1:12b). In summary, the topics of life and light in the Prologue are deployed in the contents of the Gospel. In other words, the Prologue introduces readers to the Gospel’s narrative.

3. The Word is the true light, coming to the world

If the Prologue affirms: “The true light that enlightens every man was coming into the world” (1:9), the Gospel’s story describes Jesus as the One who comes into the world and realizes his mission in the world. Usually, lots of people think that the incarnation of the Word takes place in 1:14a: “The Word became flesh and dwelt among us,” but in the narrative, the incarnation of the Word has begun from 1:4: “In him [Logos] was life, and the life was the light of men.” The Word brings life and the light to mankind that is the mission of Jesus in the world.

The Prologue also sums up the conflict between Jesus and his adversaries in 1:5: “The light shines in the darkness, and the darkness has not overcome it.” This verse announces the triumph of the light over the forces of darkness, because the darkness does not overcome the light which is Jesus. In 1:6-8, the testimony of John the Baptist indicates that the Word has been present in the history of humanity. John bears witness to the light that means he testifies to everybody that Logos-Jesus is in the world. John the Baptist enlightens this appearance of Logos-Jesus in the second part of the Prologue. In 1:15, the narrator relates: “John bore witness to him, and cried, ‘This was he of whom I said, He who comes after me ranks before me, for he was before me’” (1:15). John the Baptist will repeat this idea when he introduces Jesus in 1:29-30. The narrator writes: “29 The next day he [John the Baptist] saw Jesus coming toward him, and said, ‘Behold, the Lamb of God, who takes away the sin of the world! 30 This is he of whom I said, After me comes a man who ranks before me, for he was before me’” (1:29-30). Thus, the declaration of the narrator in 1:9: “The true light that enlightens every man was coming into the world” applies to Jesus and to his ministry in the Gospel narrative.

4. Receiving or not receiving the Word (Logos)

Before the affirmation: “the Word became flesh” in 1:14a, the narrator uses the pronoun in masculine, third person, singular: “houtos” (he) to replace the term: “Logos” (noun, masculine). In the first part of the Prologue (1:1-13), the Word has not become flesh yet, but the mystery of incarnation has been alluded through the topic: “Receiving or not receiving the Word (Logos).” The parallel structure: C (1:5) and C’ (1:10-13) describes the response of men to the invitation of Logos-Jesus. The contrast between “light” and “darkness” (1:5); between “acceptance” and “rejection” (1:10-13) refers to believing or not believing in Jesus. The narrator’s saying: “He [Logos] came to his own home, and his own people received him not” reflects the conflict between Jesus and his adversaries in the Gospel. Jesus is a Jew; he carries out his mission to the Jews, who are the chosen people of God. Jesus is the Son of God and was sent by God to his people, but most of leaders of the Jews do not receive Jesus, they do not believe in him. Specifically, the hostile behaviors toward Jesus are found in “the Pharisees”, “the Jews” and “the high priests.” In John’s Gospel, they ceaselessly seek to kill Jesus. Therefore, the parallelism between elements C (1:5) and C’ (1:10-11) summarizes this refusal in the Gospel.

The choice of “not receiving the Word” (1:11) and “receiving the Word” highlights the process (a court case) between “the light” and “the darkness” in the Gospel of John. But despite the refusing and unbelieving of “his own” (1:11), the first part of the Prologue (1:1-13) ends in the light of hope. Indeed, the narrator uses two verses (vv. 12-13) to solemnly define what “receiving the Word” is. Those who receive the Word, who believe in the name of the Word, are “children of God” (1:12). They become “sons of God” such as the Word-Jesus who is “the Only Son of God” (1:18); and consequently, they are brothers of Jesus. Jesus says about this fraternal relationship after his resurrection. Jesus says to Mary Magdalene in 20:17: “Do not hold me, for I have not yet ascended to the Father; but go to my brethren and say to them, I am ascending to my Father and your Father, to my God and your God.” Thus, according to John’s Gospel, receiving or not receiving the Word mean believing or not believing in Jesus. Those who believe in him have eternal life and walk in the light of life (8:12), they enter into communion with God, become children of God, brothers and friends of Jesus (cf. 15:13-15).

Thanks to the Prologue of John’s Gospel, readers know who Jesus really is, before reading the story of Jesus in the Gospel. The topics in the Prologue: “the Word is life and light for the world”, “knowing – unknowing”; “receiving – refusing the Word” are developed and elaborated in the narrative of Jesus’ ministry. In this perspective, the Prologue of John’s Gospel becomes a strong testimony to the readers: “Logos” (Word) in the Prologue is Jesus in the Gospel. Therefore, it is worth for readers to believe in him. They are ensured that Jesus’ teachings come from God, and he has the power to give eternal life to believers (6:68). Those who follow Jesus and become his disciples, will “have the light of life” (8:12) and inherit eternal life, because Jesus is the Logos (Word), who was at the beginning, was with God and who was God (1:1)./.